While the LAMP vs MEAN debate has been going on for quite sometime, but right now, the MEAN stack seems to be winning the popularity race at present.

While for years, LAMP (Linux, Apache, MySQL, Php) had been the best and most effective solution for Enterprise web application development due to its flexibility, cost-effectiveness, and enhanced customization. But MEAN stack, on the other hand, also offers the same benefits along with a clean and consistent mechanism to transfer data back and forth.

What’s more? – Well, compared to MySQL of LAMP, the MongoDB of MEAN provides more flexibility to store data. The Express.JS of MEAN is also helping to standardize the entire web development process. Further, the Angular.JS also offers a simple and clean way to add highly-interactive functions, while the Node.JS of MEAN provides a better nexus for running server.

In simple terms, the combination of MongoDB, Express.JS, Angular.JS, and Node.JS (aka MEAN) has been a blessing for web developers as it makes their work a lot easier even if the projects are complex.

Having built dozens of web apps for small-to-medium and large businesses, I am well-versed with each of MEAN stack as well as LAMP stack’s technologies. And in this article, I’ll share the advantages of MEAN stack over LAMP stack.

Advantages of MEAN Stack Over LAMP

As you may already know, each technology of MEAN stack can be a perfect standalone solution, but all of them shine really brighter when used as a bundle. Specifically, the MEAN stack offers following advantages over the Good ol LAMP.

The biggest advantage of using the beloved MEAN stack is that since it uses JavaScript at both client as well as server side, it’s much better and pocket-friendly.

Now, these are all very different skill sets. And, even if you come across a senior developer having more than one skill set (for example, many senior developers know SQL and Python), there will still be a need of front-end developer to complement your senior backend developer’s multi-skills. This, at the end, always results into increased development cost wherein, you can use MEAN stack and hire a full-stack (rockstar) developer and get your application developed at a much lower cost.

Right now, JavaScript is the most popular programming language in the whole world, according to StackOverFlow Survey. In the below chart, you can see how the number of full stack developers searching for MEAN stack jobs is growing steadily. This means, it’s much easier to find and hire full-stack developers as there is a huge talent pool. 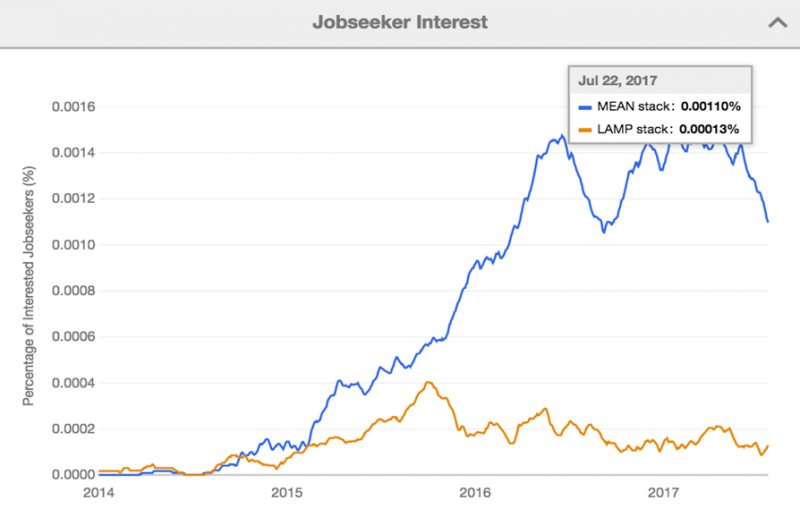 2 – Startups Love MEAN Due to Its Fast MVP Development & Scalability

All technologies in MEAN stack are free, open-source, and most importantly, they’re all highly scalable, providing a solid foundation for developing Enterprise-level scalable web apps.

In addition to the fast-time-to-market advantage, MEAN stack also has a bunch of additional libraries as well as reusable modules that are available within the stack. Npm registry, for example, has listed almost 500K packages alone. All these ready-made solutions make a significant difference in saving development time while also reducing the efforts for development.

If you’ve developed a LAMP-based web application before, then you know how much of an hassle is there in structuring and maintaining data. MySQL, like all relational databases, basically forces to store data in tables. While this isn’t and won’t be a problem as long as every single data is of exact same format, but what if that’s not the case? For instance, what if the address of two people are same but are not the same account? Or, what if sometimes you need to add three lines of information instead of two? The solution would be adding more columns each time this happens, making the table grow unbounded.

In MEAN stack, however, the MongoDB offers a document structure format that is way more flexible than relational databases like MySQL. In MongoDB you can add more information or additional lines of information by simply adding the field to your form, rolling it up within JSON (JavaScript Object Notation), and store it to MongoDB collection.

4 – The Blessing of JSON

In MEAN stack, MongoDB, Expressjs, Angularjs, and Nodejs all use JSON. This in turn makes data flow neat in all layers and without requiring restructuring or reformatting.

While importing data in LAMP stack isn’t that difficult, but that still doesn’t help the client layer. MEAN stack, on the other hand, uses JSON everywhere (on client as well as server side), which makes the data import process much easier and simple.

5 – The Power of Growing Community

While PHP enthusiasts love to cling onto the collection of great libraries created for WordPress and Drupal, and that’s a good advantage to be proud of. But Node.JS is also catching up.

Like mentioned earlier, the npm (aka Node.JS Package Manager) makes it even simpler to share reusable modules as well as code. Plus, its public libraries are also growing at a fast pace that will soon catch up with PHP’s.

In simple words, even though the PHP is in lead right now, but according to the statistics we saw earlier, it’s clear that the future will favor Node.Js.

6 – Node.JS is Far Better than Apache

Unlike Apache, Node.js is not just another web server. It’s beyond that. Node.js is a renowned JavaScript-based application that is built on Chrome’s V8 engine. Node.js not only allows to build web servers but also networking tools as well as free modules that further help in accessing data streams, networks, and more.

Furthermore, in LAMP stack it’s difficult to navigate through all layers. In addition, shuffling through different config files having inconsistent syntax is yet another uphill task. With Node.js, you can change application logic that used to provide answer to queries, change request of app routes and other similar tasks all by using JavaScript.

Since everything is in one layer and in one programming language, there is less confusion and also less chance of bugs that used to rise in LAMP due to unnecessary interactions between different layers.

Isomorphic coding simply means executing a code written in one framework to other frameworks without having to make much alterations. MEAN stack authorizes the transfer of code in between different frameworks. It simply means, if you write code in a particular framework and decide to move it to another framework later, you can do it effortlessly.

In LAMP stack, on the other hand, you’re on your own. Although LAMP stack surely provides plenty of PHP frameworks like WordPress, Drupal, and Joomla, but each of these frameworks are bit different and moving in different directions. Thus, it becomes difficult to switch from one to another.

Node.js has been largely known for its super fast performance. In fact, Node.js outperforms the competitor LAMP’s backend programming languages including Ruby, Python, and PHP, according to a number of benchmarks. And because of this performance advantage, many giants like Paypal, Uber, Wal-Mart, and Yahoo have adopted and implemented Node.js as it helps them in reduce the response time remarkably.

All in all, MEAN stack is simple, better, and fast developing. And since MEAN stack community is growing bigger day by day, it’s seems that it will overtake LAMP at some point in near future.

However, if you still need more convincing and/or has any queries regarding choosing MEAN stack for your next web application development, share them in the comment section below. I’ll get back to you with answers with concrete data. I promise.

Patel Nasrullah is a co-founder at one of the best web development company where he leads a team of expert mobile app developers, Peerbits. He devotes his time in inspiring young leaders to take the leap of faith. With the experience of 10 years in Web and App development, he now gives full attention to the enterprise by offering mobility solutions about the strategic planning and execution.

Top Reasons Why Node.Js Is an Ideal Option to Build an E-commerce Store

Learn Programming: The 10+ Best Websites to Learn to Program

The 10+ Best Node.js Tutorials With Examples

Node.js Frameworks: The 10 Best for Web and Apps Development