The Top 10 Factors that Influence the App Development Cost

If you are thinking about building an app, one of the most important decisions you have to make is around the time and money you want to spend.

On the face, it seems like an easy estimation but there goes a lot to figure out the exact ap development cost that can make it a success and bring profits for you. You need to look at your spending across ideation, design, development, marketing, adoption, monitoring, and more.

This decision on the spend has the potential to save (or waste) you thousands of dollars and potentially impacts how successful & popular it will be in the marketplace.

So what exactly should you spend on building an app?

The short answer: It depends.

Many factors influence what an app might cost, but you can follow some general guidelines when considering how much to spend on an app.

With that in mind, let us take an in-depth look at the factors that determine how much it costs to develop an app. But before that, let us also look at some of the key statistics. 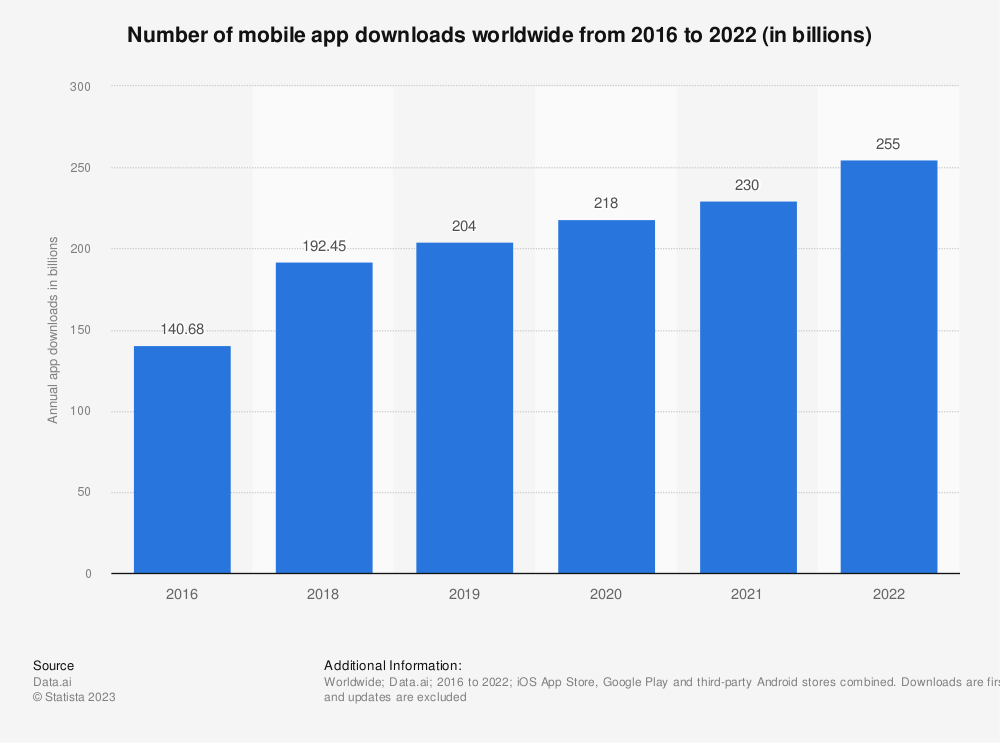 Factors that influence the cost of building an app

Before you can determine the app development cost, you need to understand the factors that affect your final price. Here are some factors that have a direct impact on what your project should cost –

From a technology standpoint, you have four major options to develop an app: native, web, hybrid app development framework, or cross-platform. Here, native apps are built for a specific platform (i.e., iOS, Android, etc.) and one needs to hire iOS or Android app developers to create native apps. Native apps offer the best performance due to direct access to platform-specific APIs and hardware on mobile devices and take more time and money than other apps.

A native app is usually the most expensive option because it requires a significant upfront investment to develop and launch the app successfully. On the plus side, a native app often provides more functionality and a higher performance level than other options.

On the other hand, web apps tend to be the least expensive option because they are built to run on any device. So, you build a web app once and the same is made available on iOS, Android, and all other platforms. The trade-off is that web apps are generally limited in terms of functionality and performance.

Finally, hybrid and cross-platform apps are somewhere in the middle. They are also built once only but are adjusted to run on multiple platforms or devices, they also pose some limitations in terms of functionality and performance when compared to a native app.

For a hypothetical app of medium complexity, app development cost would pan out as below –

#2 How much functionality does your app require?

The more functionality you want in your app, the more it will cost. The least expensive option is a “static” app that provides essential information (e.g., directions, schedules, etc.). An app with simple functionality can be produced for as little as $5,000.

However, functionality is the driving factor behind the success or failure of an app, so spending as much as possible on functionality will typically produce a better result.

Once you’ve determined the type of app and the functionality required, you need to know how long it will take to build. Unfortunately, estimating this number is not easy because there are so many variables involved in building an app: the size and experience of your development team, technical difficulties that might arise during production, and the number of revisions you ask for, to name a few.

Typically, it takes around three months to build an app of medium complexity. This time can vary depending on your budget (the more money you spend, the faster it will take), but this estimate works for most situations. A third-party mobile app development company can also say it may take up to six months, but this is rare.

As a quick reference, given below is the industry norm –

#4 What infrastructure is required?

An app can require some basic infrastructure (e.g., web hosting, cloud storage) that will increase the final price of your project. If you are building a static (i.e., non-dynamic/non-interactive) app, chances are that it wouldn’t require any significant infrastructure costs to function correctly.

However, if you’re developing a more advanced app with interactive elements (e.g., social networking, location-based features), you might need to invest in infrastructure significantly.

#5 How much experience do your developer(s) have?

If you’re working with a development firm, you need to be aware of the experience level of the developers on your team. The more experienced the developer, the more expensive the project — however, this doesn’t mean you need to hire a developer with 30 years of experience. Instead, focus on finding someone who knows the latest trends of your app and has successfully delivered similar projects in the past.

The estimated cost of junior developers with little-to-no experience in the app’s language or framework tends to be in the $20,000 to $40,000 range. Mid-level developers who have built similar apps before and know your desired language/framework can charge anywhere from $50,000 to $85,000. Working with a senior developer (or team) who has built hundreds of apps can cost $100,000 or more.

#6 Where is your developer located?

The cost of your project will be affected by where your developer is based. Most app development companies are located in Eastern Europe (e.g., Russia, Ukraine) and India — these countries offer highly skilled developers at a significantly lower cost than the United States or Western Europe.

However, if you have a specific developer in mind who is located elsewhere, it’s worth discussing the price difference between local and outsourced developers before making a final decision.

#7  Do you require ongoing support?

Many developers offer ongoing support for apps they have built, but costs vary depending on the size of your project. If you have a simple app that doesn’t require additional features or bug fixes, the developer might only charge you for building it initially. However, if your app requires several updates after launch, an annual fee can be added to the final price.

#8 Are you outsourcing or hiring in-house?

The decision to outsource or hire in-house may seem straightforward, but many factors play into this final decision. Suppose you’re outsourcing your app development project. In that case, you don’t need to worry about giving developers the necessary hardware and software they need to build your app — they will take care of all costs associated with creating and maintaining your app.

On the other hand, hiring in-house mobile application developers allow you to work closely with developers throughout the app-building process. However, this option (in-house) can be more expensive since it usually means purchasing the necessary hardware/software for your team members.

The cost of building a simple mobile app in India ranges between $7,640 and 20k!

#9  Cost of App Deployment and Publishing

A common misconception about the app development process is that it ends once your developer delivers the final product. Unlike websites, apps are not published on their own. Besides, you need to make changes to your billing system to support in-app transactions, update your website’s code with a link to download your app, and submit an iOS or Android application to the respective app store for approval.

However, remember you will have to pay for publishing in addition to building your app. Moreover, there are 3739 new apps added to the Google Play Store every day!

You need to market your app just like any company would market its products. And, since you probably won’t be able to rely on word of mouth or social media alone for this task, you’ll most likely have to pay for your marketing efforts as well. This includes paying for promotional spots (e.g., banner ads, YouTube pre-rolls) or hiring a marketing agency.

There’s no escaping the fact that building an app comes with a steep price tag. But, you can make your budget go further by understanding what goes into each part of the app-building process and working with a reliable developer willing to offer competitive pricing. An iOS app development company or Android app-maker can help you bring your mobile app to life, offering expertise in the latest programming languages, tools, and processes.

Luckily, you can use these guidelines to help you estimate the price of app development. If you need more information, reach out to us on Twitter or Facebook, and we’ll get back to you as soon as possible!

Thank You for Reading…!! We hope this article provided a useful and informative insight into estimating the cost of building your app.

Also on noeticforce.com – Cordova vs React Native vs Xamarin vs DIY

Q1: How much does it cost to develop an app professionally?

A1: The cost of app development dramatically depends on the type of app you want to build. If you’re looking for a relatively simple app in terms of features and functionality, it can be created at a fraction of the total price. However, if your goal is to create something more complex with many different functions, it can become costly.

Q2: What does the average app development cost?

A2: According to Business Insider, the average cost of building an app ranges anywhere from about $1,000 to $200,00. It just depends on what kind of app you want to build and how many features it requires. For instance, if your goal is to build a simple mobile app that serves as an informational portal, that can be done at a relatively low cost.

Q3: How long does it take to develop a mobile app?

A3: The time required for building an app varies from one project to another. While some may take just a few weeks, others can take several months or even longer, depending on the app’s complexity and how many features it has.

However, on average, it would take time in the following ways:

Q4: How much does it cost to develop an iOS app?

A4:  The iOS app development cost can vary greatly depending on the app’s features and the developer you choose. However, on average, expect to pay anywhere from $10,000 to $40,000 for building an iOS app with the most capabilities.

Q5: How much does it cost to develop an Android app?

A5:  It costs almost the same to build an Android app as it creates one for iOS. However, some factors can affect Android app development pricing, such as your developer’s experience and the demand for the specific app within the market. On average, expect to pay anywhere from $10,000 to $40,000 for building an Android app with the most capabilities.

5 Things to Consider while Choosing an App Development Company

10 Powerful Plugins to Drive Sales to Your Shopify Store